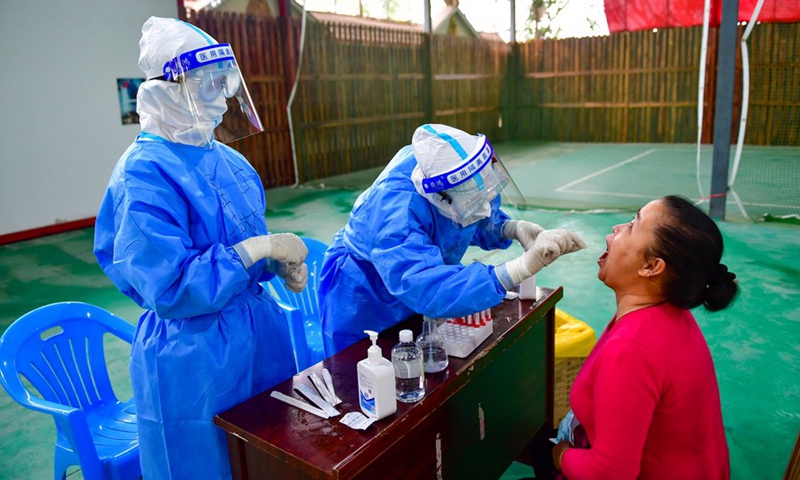 A medical worker takes a swab sample from a woman for a COVID-19 test at a test site in Ruili City, southwest China’s Yunnan Province, April 6, 2021. (Photo : Xinhua)

Jade sellers in the town of Ruili in Dehong Prefecture in Yunnan province, which borders Burma, are facing unprecedented pressure following the Covid-19 outbreaks that have caused the closure of the town since last year.

The enhanced prevention measures weighed on the cross-border trade in jade and jewelry, which has been a mainstay of local economic growth.

Dehong Prefecture has reported 211 cumulative cases, including three new infections. The sporadic outbreak caused by imported cases has plunged the region into constant exposure to the virus.

Ruili vendors said their stores have been largely closed since April, making it difficult for them to continue in business.

“We have goods worth hundreds of thousands to one million yuan waiting to be delivered, but due to the virus the delivery service has been suspended,” an official told the Global Times on Thursday. a local jewelry store named Li.

For those who have chosen to sell their products via live streaming, it is impossible after a government decision to maintain a ban on the activity as part of efforts to stop the risk of the infection spreading.

Those who break the rules will have their stores closed or their business licenses revoked. Jewelry and jade, as well as electronic devices used for the live broadcast will also be confiscated, according to a local government statement.

Suppliers the Global Times approached agreed on the importance of strong virus prevention measures, but expected such regulations could be enforced in a more scientific way in a way that allows businesses to operate. .

A salesman surnamed Hu struggled to make a living during the lockdown. Hu is not a local resident and intended to leave town to find new opportunities after the local jade trade was suspended.

However, in order to take their jade related products with them, they must apply for a special verification that proves their products are their private property, which can be difficult to get through, amid the city-wide lockdown, Hu said. .

Ruili’s border is 169.8 kilometers long. As of November last year, up to 100,000 Burmese nationals were working and doing business in Ruili. The particular economy and culture of the region represent a great challenge for the prevention and control of epidemics.

In the past year, the town of Ruili has been closed three times due to intermittent epidemics.

In mid-September last year, a small outbreak transmitted by individuals sneaking into Ruili caused a city-wide lockdown. Ruili reported a second outbreak in March, leading to another round of lockdowns that last until the end of April.

The most recent lockdown began on July 7, after local cases caused the city’s main urban district to shut down, with all residents required to self-quarantine at home.